How much does my TV cost to use?

Feet up, television on.

For many of us, collapsing in front of the TV is almost an automatic reflex each evening. In fact, the average Briton spends almost - wait for it - 10 years of their life sat in front of the television.

But do you know how much this viewing time is costing?

While 33% may seem high, consumer electronics only represent 4% of what’s used in a home; white goods like fridges and freezers use much more electricity, not least as they’re on all the time. 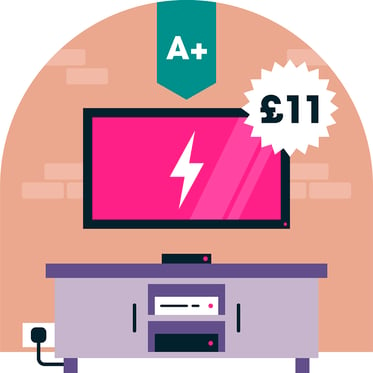 But what does that TV time look like in terms of the money from your pocket? The answer depends quite a lot on the type of television you have. An energy efficient A+ rated 40'' TV typically costs around £11 to run each year, much less than the average new 40'' TV, which comes in at about £29 every year.

Nor is size too much of an issue. Even though televisions have been getting wider and wider, improving efficiency more than compensates for this.

Reducing the cost and environmental impact of your TV

Here are some simple ways to save money on TV use:

Then, safe in the knowledge you’re not wasting any electricity, you can sit back and enjoy your favourite programmes…though you might want to think twice about those box-set binges!

With Loop, you can find out how you use electricity, then make smart decisions about using less - click here for your chance to try Loop for free.