Creating a more energy efficient home, with lower energy bills, doesn’t mean turning the thermostat to rock-bottom, switching off the lights, and sitting in the cold and dark.

Nor does it have to mean making a large financial outlay, such as buying a more energy-efficient boiler.

In fact, there are many small, often overlooked steps you can take to save on energy without compromising on comfort or changing your lifestyle. Here are some simple ways you can make a difference:

1. Beware of your 'Phantom Load'

Some devices constantly sap energy in the background, when you’re not using them or have even switched them off. This is the ‘Phantom Load’.

Part of this can’t be helped. You don’t have much choice but to keep your fridge and freezer running, for example, while you may need your router on at least most of the time.

But you can at least do something about the other contributor to your Phantom Load, devices that are left on standby. These add £30 a year on average to energy bills.

It’s simply a case of remembering to turn off appliances such as your microwave, washing machine and oven at the plug when you’re not using them. If you think you’ll forget, then enlist other family members to help as well, including any children who are old enough.

Failing that, invest in a standby saver, a device allowing you to turn off multiple plugs at once.

2. Look after your fridge

Keep your fridge and freezer full. If you don’t have enough food, you can always add bags of ice to your freezer or put a jug of water in your fridge. This enables them to retain the cold better, meaning they won’t have to work as hard.

Also, make sure your fridge is set at the right temperature of 5 degrees Celsius or less. And while you’re there, check there is a gap of around 10cm behind your fridge to let heat flow away more easily.

3. Give radiators some space

Sofas often get shoved further and further back against the walls and nearly half (42%) of homes have one or more radiators blocked by furniture. Pull them away from the wall every now and then, to let warmth from your radiators circulate better.

While you’re there, bleed your radiators and dust them off, as both small jobs can help them work more efficiently. 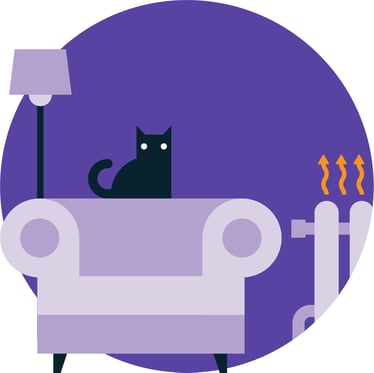 There’s an art to filling dishwashers: underfill it and you’ll use just as much electricity and hot water as a full load; stack things too tightly and you’ll end up finishing the job yourself by hand, as the dishwasher won’t be able to wash them properly.

Get in the habit of running the dishwasher on economy mode, which means it uses less power to heat the water.

5. Use the right hob ring

If you’re cooking a small amount of food, use a small pan on a small hob ring. Putting it on a big ring would waste energy.

Use a lid and turn the heat off just before the food is fully cooked to let the remaining heat finish the job.

Giving your hob a quick wipe down will ensure it works as effectively as possible.

6. Use your microwave more

Microwaves get a bad rap. They’re often associated with TV dinners and processed food. But they’re more energy efficient than using a hob or oven, as they heat the food directly rather than the air around it.

There’s nothing quite like a warm soak in the bath. But if you want to cut back on energy use, showers come out tops. According to the Energy Saving Trust, if a family of four all replaced one bath a week with a five-minute shower, they’d save up to £20 a year on gas bills.

If you’re prone to losing track of time in the shower, consider a timer (which you can easily find online for free). Just one minute less under the shower each day could snip £10 a year off your bills. 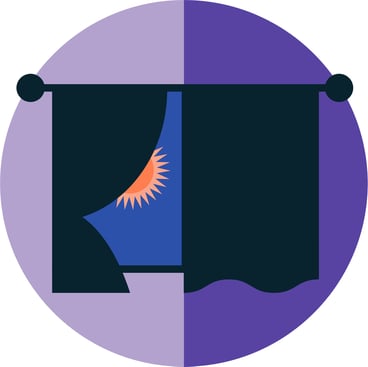 8. Use your curtains to best effect

Try and get in the habit of closing curtains and blinds at night to keep the heat in and cold out. And then in the morning, open them to let any warming sunshine in.

If you plug your phone in to charge overnight, it will still sap energy even when you phone is fully charged. So, try and avoid leaving it plugged in for hours on end.

If charging overnight is just more practical for you, then buy a smart plug which will stop the electricity flow once your phone battery hits 100%.

The average Briton spends almost 10 years of their life watching TV and televisions account for 50% of home electronics energy use.

The savings can be surprising. An energy efficient A+ rated 40'' TV typically costs £11 to run each year, much less than the average new 40'' TV, at £29 to run each year.

In general, whenever you’re buying a new appliance, choose the most energy-efficient model you can afford to make long-term savings.

Even if you’re not in the market to buy a new television, you can make a difference by simply turning down the brightness on your existing set

Loop, the essential energy saving assistant, launches soon. Subscribe to our regular newsletter below and we'll keep in touch as we get closer to launch.