Smart meter rollout: progress so far and what happens next

For anyone who wants to better understand their home energy use, and ultimately take better control, then a smart meter is often considered the first place to start.

But the rollout of these devices that began back in 2016 hasn’t been plain sailing. Here’s a recap on what’s happened so far and a look at what’s next.

What is a smart meter and why are they being rolled out?

A smart meter is a device that monitors your gas and electricity usage and is intended to provide accurate readings directly to your energy supplier.

The government considers the rollout to be an important step in helping consumers to take control of their energy use, save money and greenhouse gas emissions, and develop positive energy-saving habits.

But it’s not just about what you use at home – by monitoring the energy used by homes across the UK it will be easier to accurately predict consumption patterns and balance overall supply and demand for the national grid. 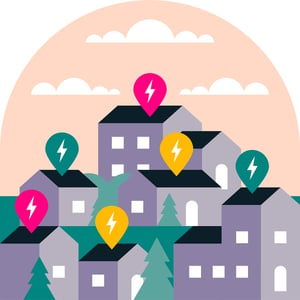 That being said, it’s important to remember that a smart meter on its own is purely an information provider. In order to make savings, you have to use the information it provides and make changes to lower your energy use, so not every household will see the same results.

Luckily, Loop can link to your smart meter for free, giving you lots of extra functionality to the information you see on your in-home display. Loop lets you monitor and understand how you use electricity, and then helps you to make smart decisions about where you can use less. The app offers practical advice and insight, personalised to you. On average, Loop users cut their usage by 10%.

To complete the rollout, it has been estimated that around 53 million smart meters will need to be fitted. The devices have to be professionally installed, so that means visits to some 30 million homes and small businesses – put simply, it’s a huge logistical challenge.

Over the last few years, timelines have continued to change. The rollout start date was pushed back a number of times before officially starting in 2016 and more than 19.5 million smart meters have been fitted in homes so far. So, we’re not even halfway there yet.

The government initially expected to have a smart meter in every home by 2020. However, in September 2019 that deadline was pushed back to 2024, giving energy companies an extra four years.

This deadline has now been pushed back by a further six months to 30 June 2025 to make up for the time lost during the Coronavirus crisis, as installations ground to a halt when lockdown was announced.

While the differences in each model aren’t immediately obvious, the problem comes when a customer with a SMETS1 switches to a new supplier and the meter becomes ‘dumb’, meaning it loses functionality.

In fact, nearly half (48%) of first-generation smart meters stopped working after customers switched energy suppliers, according to Which? research. While these malfunctioning devices can still be used as a ‘traditional’ meter and people are able to manually take readings, they can no longer access the smart display and the advertised benefits of smart meter functionality are no longer accessible.

Government figures revealed around 4.5 million smart meters were installed in 2019, but approximately 1.5 million of these were first-generation devices.

There’s no doubt that this lack of interoperability has been frustrating for consumers, but the government has announced it will be moving SMETS1 devices over to the national smart metering communications infrastructure so they can continue to be used after switching supplier.

However, a timeline for this promise is yet to materialise and it’s not entirely clear how it will be implemented.

While the Coronavirus pandemic also undoubtedly put a dampener on the government’s plans to push on with the rollout, it has announced it will set ambitious targets to make up the shortfall, putting consumer safety ‘at the heart’ of its plans.

As part of these plans, targets for individual suppliers will be agreed later following a consultation period and they are likely to be implemented from July 2021.

The rollout is undoubtedly an important part of the plan for the UK to work towards achieving Net-Zero emissions targets by 2050.

Smart meters are a useful tool for consumers to begin to develop an understanding of how they use energy at home and are, for many, the first step in taking control of their energy use. Together with Loop, you can fully lock the benefits of a smart meter.

Subscribe to our regular newsletter below to become part of the Loop community, and receive regular updates to help you make smart decisions about using less energy.
Tags: Energy Saving, Smart Meters, Long Read
Back to blog

Electric vehicle: what to consider when buying a second-hand EV

With government legislation banning the sale of new petrol and diesel vehicles by 2030, electric...
Read More

Hi, my name’s Steve and I’m from the product team at Loop. In this Blog, I’m going to share how our...
Read More