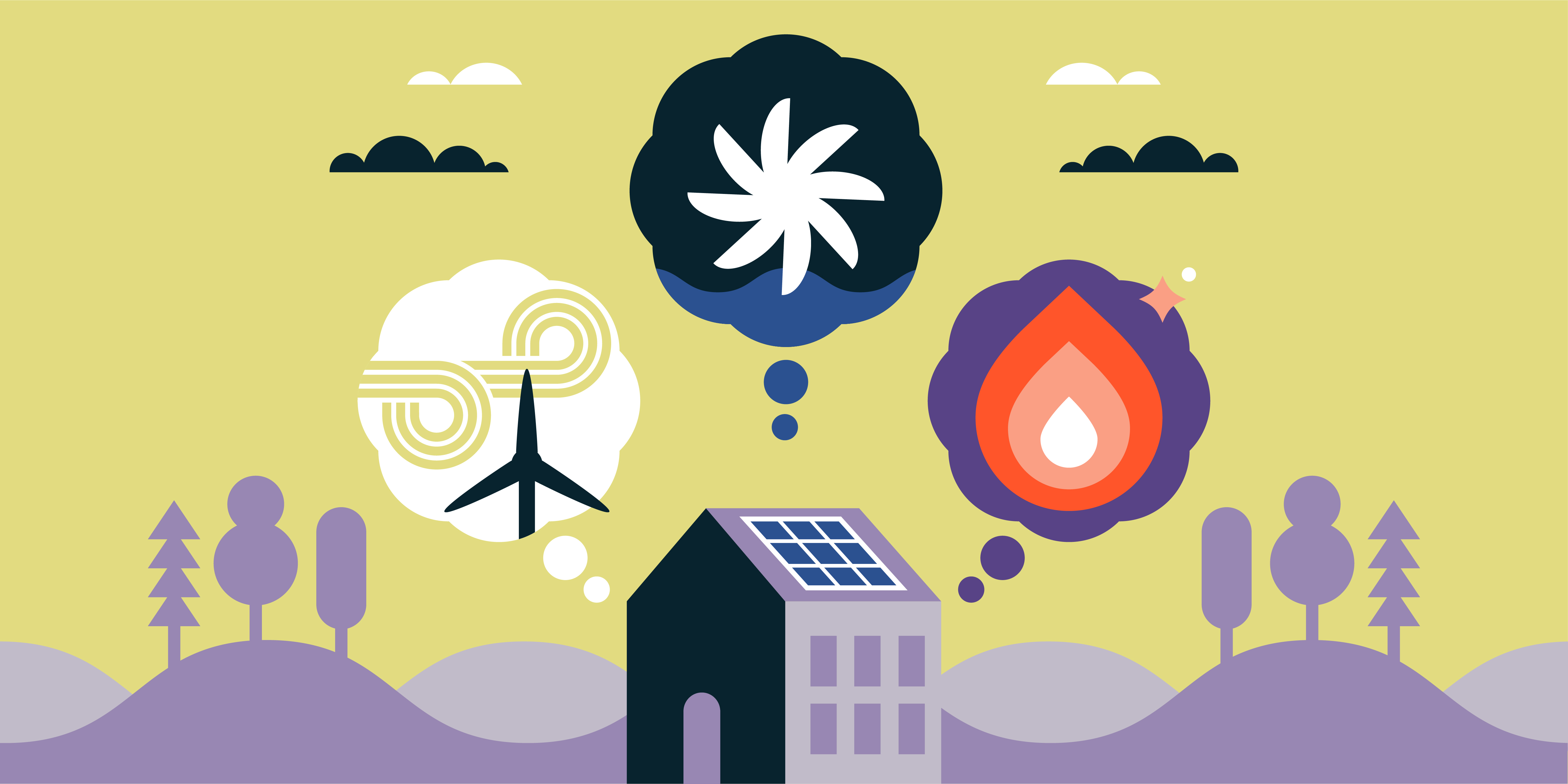 Not just solar: renewable ways to power your home

Homeowners who want to have less of an impact on the environment - and save money to boot - can turn to nature’s bounty, such as the sun, wind or water.

Here’s a simple introduction to some of the ways that households can use renewable energy to reduce - or eliminate - their reliance on the grid.

There are two main types of solar energy systems which capture energy from the sun for use in your home:

Solar PV, or solar panels, use photovoltaic cells to capture and convert sunlight into electricity. Depending on which part of the UK you live in, a home solar PV system could save around 1.3 to 1.6 tonnes of carbon per year.

Solar thermal panels on your roof use heat from the sun to heat water, which is stored in a hot water cylinder. According to consumer group Which? solar thermal panels typically cost between £4,000 and £5,000 to install and could save you around £55 to £95 per year on your water heating bills.

To find out more, see our guide to the Smart Export Guarantee, or SEG, which is a way of getting paid for the excess electricity you generate from solar panels.

Hydroelectric power is the energy derived from flowing water, using a turbine. The greater the height and the more water there is flowing through the turbine, the more electricity can be generated. So, to have a hydro as an option for generating your own renewable energy, it really depends on exactly where you live; you need to be near flowing water.

If you do happen to benefit from fast-flowing water nearby, having a hydro system can enable you to generate electricity 24 hours a day. You can often generate more than enough for your household, or even for a small community.

It will be no surprise that costs for installing a hydro system vary; they can be particularly cost-effective for off-grid homes.

Though you may be familiar with the giant turbines you sometimes spy from motorways, you may not realise that wind turbines can be used on a domestic basis to harness the power of the wind and generate electricity.

Domestic-sized wind turbines are generally either free standing, or smaller, less-efficient roof-mounted models. A pole-mounted model with generation capacity of 2.5 Kilowatt (kW), might cost between £9,900 and £19,000, while for a capacity of 6kW you’ll pay between £21,000 and £30,000.

According to Energy Saving Trust, a 6kW turbine, in the right location, can generate around 9,000kWh a year; far above the approximate 3,700kWh of energy that the average household typically uses each year.

But it goes without saying that you need to live in a windy spot.

Biomass heating systems burn organic material - such as logs, pellets or chips - in a stove or boiler to provide heat and hot water.

Costs for installing a whole biomass system, a stove and a boiler could be more than £15,000, according to Which? But in return, you could save up to £960 a year compared to an old electric heating system, according to Energy Saving Trust.

It's very important to be aware that biomass heating systems aren't entirely green, as they do produce pollutant. Buy they are more efficient than open fires and other burnt fuels.

If you have a biomass boiler, try to use the most sustainable fuel that you can, such as recyclable pellets.

Why not make use of existing heat in the air or ground?

That’s the idea behind ground and air source heat pumps, which use this heat to warm up radiators, underfloor heating systems, or water in your home.

This technology is deemed semi-renewable, as it needs electricity to run, so will have some impact on the environment. Minimising heat loss is crucial so you need to have a well-insulated home to prevent the heat pumped from escaping, while you also need space to have one of these systems installed.

Many heat pumps are eligible for payment through the Renewable Heat Incentive, a government scheme that provides payments to homeowners who generate their own heat.

The two main types of home heat pumps are:

Air source heat pumps (ASHPs), which absorb heat from the outside air - even when it’s freezing cold outside. Installing a typical system costs around £6,000 to £8,000. The financial savings will then depend on how efficient your previous heating system was. For example, according to Energy Saving Trust, replacing an Old (G-rated) LPG boiler with an ASHP could save you £1,145 - £1,350 annually.

Ground source heat pumps (GSHPs), which use water-filled pipes that are buried underground to extract natural heat from the ground. Installing a typical system costs around £10,000 to £18,000. Like ASHPs, the financial savings vary; for example, according to Energy Saving Trust, replacing a G-rated LPG boiler with an ASHP could save you £695 to £805 annually.

These are essentially a new type of boiler – and are similar in looks and size to boilers.

But unlike a standard boiler, micro combined heat and power (micro-CHP) technology generates heat and electricity simultaneously, from the same energy source.

Despite being powered by mains gas or LPG, they’re considered low carbon technology because they are more efficient than getting electricity from the grid or burning fossil fuels for heat. In fact, some systems have achieved efficiencies approaching 90%, meaning that heat loss is kept to a minimum.

Subscribe to our regular newsletter below to become part of the Loop community, and receive regular updates to help you make smart decisions about using less energy.
Tags: Renewable Energy, Long Read, Technology
Back to blog

Last year was the cleanest year on record for UK energy generation, and in four out of 12 months...
Read More

The UK has thirty years to reach Net Zero, having passed laws to end its contribution to global...
Read More

How do solar panels work?

If you want to generate your own renewable energy at home, then you’re likely to start with solar...
Read More