Are you one of the 11 million in the UK who are on a super-expensive default energy tariff?

When your energy deal (or Fixed Price Tariff) ends, most energy providers will roll you onto their standard variable tariff (SVT) and these are typically significantly more expensive than the cheapest Fixed Price Tariffs available.

It’s no secret that customers are paying above the odds for SVTs and, to protect consumers, energy regulator Ofgem enforced a price cap last year. But despite the cap, householders could still be paying hundreds more than they need to.

At the time of our investigation, the most expensive estimated annual bills for a dual fuel SVT came in at £1,127 with N.Power and E.ON, an eye-opening 25% (£227) more than the estimated bill for the cheapest Fixed Price Tariff deal with Octopus at £900.

So even if you have already switched tariff previously in pursuit of a better deal, you could still be out of pocket. If you don’t review your tariff at the end of the fixed term, you could pay over £200 more for your bill than if you were on the cheapest available deal with the same company, as you will be rolled onto an expensive default tariff. 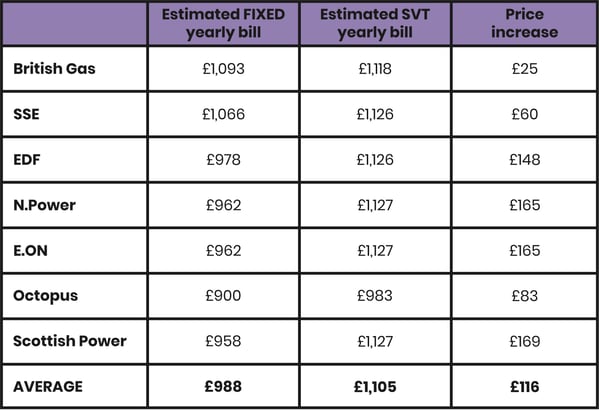 The best vs the worst

Switch on to switching

Despite the growing awareness of the savings available when opting for fixed tariffs, recent figures from Ofgem showed that just a quarter of customers switched supplier in 2019 (24%). And just 18% switched to a new tariff. The regulator also revealed almost half (49%) of customers have never switched or have only switched once.

To understand more about the reasons why people avoid switching tariffs, Loop recently conducted a consumer survey which found that a quarter of people (25%) don’t switch supplier as they’re happy with their bills as they are. This figure rose to over a third (35%) for those aged over 65.

Perhaps surprisingly, more than one in ten (13%) people admitted they “couldn’t be bothered” to switch, and a quarter (25%) aren’t aware of the financial savings available to them.

But many are unaware that there are deals to be had. More than one in ten (13%) of those that have never switched said they trust their supplier to always give them the best deal, but Loop’s research revealed they could be paying hundreds more for their bill than if they were on the cheapest available deal with the same company. Thirteen percent of people said they don’t understand the options available to them or feel anxious or stressed at the thought of going through the process.

With quick and easy tariff switching built into the app, an energy-saving assistant like Loop lets you choose the tariff that’s right for you, based on the actual energy you use and guides you through the process, step-by-step, in less than ten minutes.