Most people are now aware of the climate crisis and what is at stake. They also tend to have at least a rough idea of which of their actions are bad for the environment, and which can have a positive impact.

So why the lack of action? Why are most people still driving around in gas-guzzlers, jetting off on long-haul holidays and powering their homes using fossil fuels?

It’s a question that environmentalists, governments and others have long grappled with. For the answers you need to delve into human psychology. Look no further than the ‘Dragons of Inaction’, an ever-growing list of the reasons people don’t always behave in pro-environmental ways collected by Professor Robert Gifford, Professor of Psychology and Environmental Studies at the University of Victoria, Canada.

Here’s a round-up of some of the barriers to action, or ‘dragons’, that Professor Robert Gifford has identified. Do you recognise yourself in some of these?

Limitations resulting from how we think about things

Prof Gifford writes that thinking about the future usually takes a back seat to the present, so taking action to prevent the future impacts of global climate change – which are sometimes projected decades into the future – does not come naturally.

There’s also a lack of knowledge about which actions to take, how to go about them and their relative benefits. You can be forgiven for getting confused, Prof Gifford notes, citing a study showing that New Zealand lamb shipped to the UK for consumption there apparently has a much smaller carbon footprint than lamb produced and eaten in the UK. It’s enough to stick your head in the sand.

People are bombarded with environmental danger messages from the media, the government, and scientists. When these are too similar and too frequent they become wallpaper, Prof Gifford says, making behaviour change unlikely.

While optimism generally is healthy, it can be overdone, Prof Gifford says. People tend to underestimate their own risk from environmental hazards, which hinders their pro-environmental action.

Because climate change is a global problem, many people believe that their actions won’t make a difference - or worse, that nothing can be done even through collective human action. 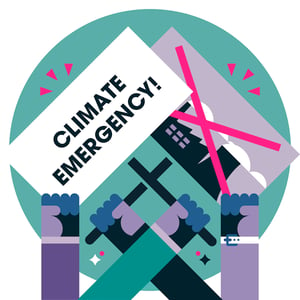 Prof Gifford notes that some religious and political views can act as strong barriers to behaviour change as believers believe a higher power is in complete control. What’s the point in taking individual action if that’s the case?

Similarly, he says, overconfidence in technology to solve problems can serve as a barrier to pro-environmental behaviour.

People tend to compare themselves to others and if family and friends are not doing their part, individuals may not bother either. This can work both ways when it comes to environmental action. As Prof Gifford proffers: “Why should I change if they won’t change?”

Similarly, it’s easy to use the damaging environmental actions of organizations, other nations or well-known people – think celebs flying around in their private jets – to justify your own individual lack of action.

Investments of money and time can be potentially harmful to the environment, Prof Gifford warns. He is referring to the sunk cost fallacy, where people continue a behaviour or action as they’ve already invested into it, whether it’s time, money or effort.

He gives owning a car as an example. You’ve paid all that money for it, so you want to use it (potentially to the detriment of the environment).

He notes too that many habits are extremely resistant to change, such as commuting by car.

When people begin with a basic disbelief in others’ views, they are unlikely to take direction from them, Prof Gifford funds. For example, if scientists and politicians are disbelieved as a matter of course, their suggestions to be green are likely to be ignored.

Fear of the risks

Changing behaviour entails several risks, which is why people are often risk-averse. Prof Gifford notes that these risks include:

“I recycle, so I’ve done my part.” It’s easy to fall into this trap. Usually a behaviour that is easy to adopt is used for tokenism, Prof Gifford suggests, and these changes may not have as great an impact on the climate as other changes would.

That’s just a summary of some of Prof Gifford’s dragons – you can read more in a very accessible paper he has written on the topic.

The hope is that with a better understanding of these dragons, everyone can do more to protect the environment.